What a great days birding we had yesterday, the last full day of the tour. We had already seen lots of the birds from this altitude and habitat, but the trail held several key species that are difficult or impossible to see on other trails. The day started well with our first stop just outside the Lodge grounds where we had good views of a Half-collared Sparrow. We then drove for around 35 minutes until we arrived at our first stop on the Macae de Cima track, this produced a male Tufted Antshrike and a Fawn-breasted Tanager. We continued on driving and stopping at various key areas for certain target species for the rest of the day, so many highlights today that included Glittering-bellied Emerald, Rufous-capped Antshrike, Cinnamon Tanager, Spix’s Spinetail, White-bearded Antshrike, Shear-tailed Grey-Tyrant, Long-tailed Tyrant, Spot-winged Wood-Quail, Cryptic Antthrush, Spot-billed Toucanet, White-bibbed Antbird, Grey-bellied Spinetail, Slaty Bristlefront, Bare-throated Bellbird and Yellow-eared Woodpecker. We arrived back at the lodge by 16.00 and decided to go and look again for Variegated Antpitta. On the way we came across a great mixed flock which included White-collared Foliage Gleaner, Sharp-billed Treehunter, Plumbeous Pigeon, Orange-eyed Thornbird, Rufous-browed Peppershrike, Lesser Woodcreeper and Pale-breasted Thrush. Upon arrival at the Antpitta spot we played some Antpitta call and unfortunately didn’t get a response, we did however have nice views of another Cryptic Antthrush. Shortly afterwards the Antpitta called and hopped across the forest floor some distance down the slope. After a little more playback it flew across the path and landed in a tree opposite. After a while we managed to pick it up and we all had good views of this wonderful bird even though the light was now beginning to fade. What a day! 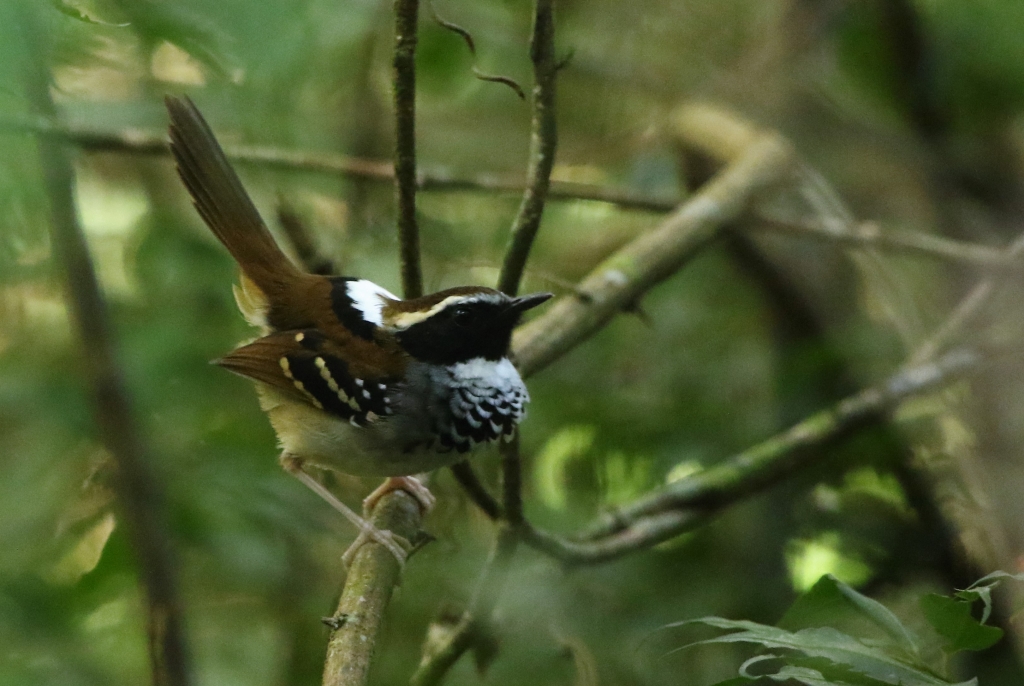